He is so right and hysterical. I (Vida) loved it when it happened.

Some fans gobbled up that bait so fast they damn near choked on it!

I knew I was being diabolical.

I knew the fans were going to lose their shit, and be all angry, thinking we’re changing it, that it wasn’t going to be right. And I was right. Everybody went completely crazy. 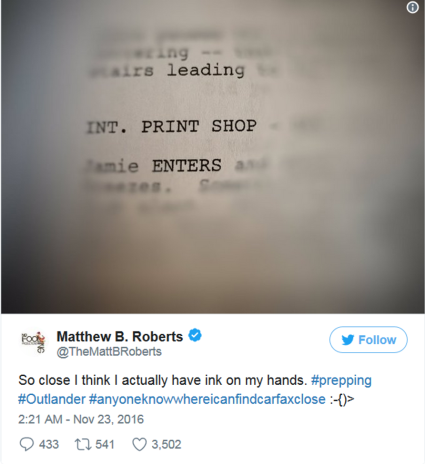 Most fans of book-to-television adaptations are quite used to major alterations—heck, Game of Thrones features characters who are dead on the show but alive in the books, and vice versa. But Outlander has always taken pride in being more faithful to the text than most, the text being in this case a series of books by Diana Gabaldon. Because of the crucial reunion happened in the third book in the series, Voyager, readers were expecting a certain sequence of events when Claire and Jamie reunited after two decades apart in different centuries—a sequence that most decidedly does not start with Jamie entering the shop.

Fans were quick to point that out on Twitter (“Why does it say ‘JAMIE enters’? He’s already there!”, “Page 312. Not that I’ve memorized it!”). Roberts’ response? “Be calm and print shop on.” And as the worried fans tried to catch a breath, they also tried to trust him. “This may well be the biggest moment in television history,” one fan reminded him.
Read more >>>

My Forty Something Life