The journey was scheduled in story order so we had the luxury of allowing Richard’s own beard to grow naturally—his beard grows quickly so it was effective. A wig was used to lengthen his hair, and in the later stages, weft was added to lengthen the wig. Bruising, weather beating, and broken bones were a mixture of make-up and physical acting for Richard.

When he was beaten by Jamie, one eye was made swollen shut with a silicone piece and the other swollen with a smaller piece of scarring silicone. Five in all were applied to his face and filled with make-up scab and blood. 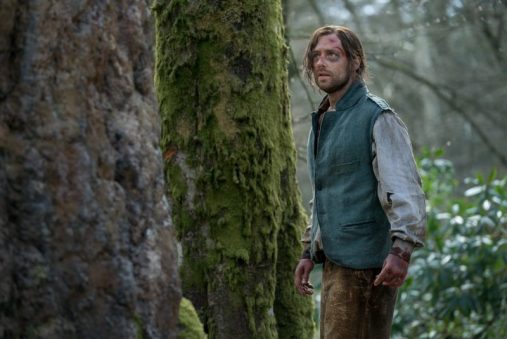 At the start of the journey with the Mohawks we used lenses that had been custom made and painted to look bloodshot, added redness and bruising on his face and eyes, and painted his wrists raw.

Once he was mid-journey, we added a make-up scab to the raw painting of hands and wrists to show rope cuts and friction burns. A smaller swelling was used on the eye and the same cuts were used, but glued closed, to show some healing. Weathering and dirt were increased, his lips were dry and cracked with a custom product, and his eyes were reddened and darkened to show extreme fatigue. The scar above the brow—this will be a scar that will remain in the future.

Why yes, they are. #Bridgerton2 #Bridgerton #Kanthony
Are you ready for this episode? #Outlander
Yeeesss, queen! #KateSharma #Bridgerton #Bridgerton2
Can't wait to see this and you in it, @olivierhuband!
Well, this is good news.
Amen, and amen!
Advertisements