During the Regency era in England, eight close-knit siblings of the powerful Bridgerton family attempt to find love. Based on eight books by Julia Quinn.

Netflix turned the books into a streaming television period drama series. It is created by Chris Van Dusen, and produced by Shonda Rhimes as her first scripted show for Netflix.

For the novel the season is based on, see The Duke and I.

Can there be any greater challenge to London’s Ambitious Mamas than an unmarried duke?—Lady Whistledown’s Society Papers, April 1813

By all accounts, Simon Basset is on the verge of proposing to his best friend’s sister—the lovely and almost-on-the-shelf—Daphne Bridgerton. But the two of them know the truth—it’s all an elaborate ruse to keep Simon free from marriage-minded society mothers. And as for Daphne, surely she will attract some worthy suitors now that it seems a duke has declared her desirable.

But as Daphne waltzes across ballroom after ballroom with Simon, it’s hard to remember that their courtship is a sham. Maybe it’s his devilish smile, certainly it’s the way his eyes seem to burn every time he looks at her . . . but somehow Daphne is falling for the dashing duke . . . for real!

And now she must do the impossible and convince the handsome rogue that their clever little scheme deserves a slight alteration, and that nothing makes quite as much sense as falling in love.

For the novel the season is based on, see The Viscount Who Loved Me.

This time the gossip columnists have it wrong. London’s most elusive bachelor Anthony Bridgerton hasn’t just decided to marry—he’s even chosen a wife! The only obstacle is his intended’s older sister, Kate Sheffield—the most meddlesome woman ever to grace a London ballroom.

Contrary to popular belief, Kate is quite sure that reformed rakes do not make the best husbands—and Anthony Bridgerton is the most wicked rogue of them all. Kate’s determined to protect her sister—but she fears her own heart is vulnerable. And when Anthony’s lips touch hers, she’s suddenly afraid she might not be able to resist the reprehensible rake herself…

Gabrielle Collins is back in the hosting chair, ready to bring you behind-the-scenes goodies along with cast and crew interviews to satiate your “Bridgerton” needs. 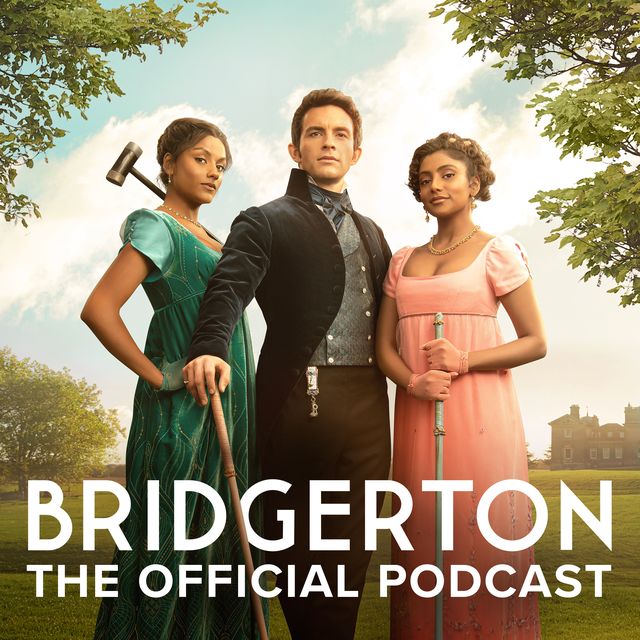 Season 1 of Bridgerton: The Official Podcast

This essential companion podcast to Shondaland’s hit Netflix series brought us plenty of Bridgerton breakdowns courtesy of the series’ cast and creatives such as Nicola Coughlan (Penelope Featherington) and Claudia Jessie (Eloise Bridgerton) — also known as the beloved Peneloise — Golda Rosheuvel (Queen Charlotte, who’s getting her own spin-off!) together with the formidable Adjoa Andoh (Lady Danbury), and executive producers Shonda Rhimes and Betsy Beers in an incisive interview about what it took to bring Julia Quinn’s book series to life. And we’d be remiss to not mention the can’t-miss season-one interviews with Lizzy Talbot, the intimacy coordinator responsible for those hot-and-heavy sex scenes, as well as costume designers Ellen Mirojnick and John Glaser.

Season 2 of Bridgerton: The Official Podcast

Follows suit, featuring this season’s notable names giving us all the behind-the-scenes deets from the new season. Listeners will hear in-depth interviews with Simone Ashley (Kate Sharma) and Jonathan Bailey (Anthony Bridgerton), Charithra Chandran (Edwina Sharma), and Coughlan, who returns to kick off the series. Best of all, Bridgerton author Julia Quinn makes an appearance, providing even more insight into creating the lush Regency-era England backdrop that would become the on-screen world of Shondaland’s Bridgerton Netflix series.