Skip to content
We decided to share some of what they provided for Epi7 – Faith. We absolutely love Bouton (Scamp) and Jon’s set designs. The Star Chamber was even better than we imagined from the book. Enjoy!

Sue Morrison in the Set Decoration department is in charge of finding animals for the show. She showed us a picture of Scamp and we thought he looked perfect. We brought him in for a mini-audition, mainly just as a formality. We wanted to make sure he would walk on a stranger’s body, since it’s an important part of his role. We had an extra lie down on a gurney and Scamp’s trainer gave him commands from off camera.  He did great!

Scamp was brought into Dumfries and Galloway Canine Rescue Centre in beautiful south-west Scotland as a stray in April 2009. We were able to estimate his age reasonably accurately as 16 weeks, because he only had adult incisor teeth. My daughter Pippa, then aged 10, had been pestering me for a rescue dog to call her own, since we had lived in at the Centre since its inception in 2003. I have always had a large “family” of Golden Retrievers (usually around 8) and had resisted her pleas until Scamp arrived—one look at his wee face and I was hooked! Not only is he utterly adorable and cheeky, but he is incredibly smart and quick to learn. He actually knew so much already at a tender age, we believe he had an “old soul” in a young body, that he had been here before!

The rescue center had previously assisted animal agent David Stewart of Creature Features with finding suitable dogs for part in various film and TV work as well as modelling, and when he asked us to find a very trainable terrier for a particular challenge in early 2013, Scamp seemed to be the ideal candidate. It was for a TV advert for a well-known Scottish soft drink, whose series of humorous adverts were renowned. The dog needed to be able to bark on command by a visual cue, but in addition he would be held by a strange actor in a white coat, and he would be wearing an Elizabethan post-operative collar! No mean feat but after a few weeks training (which involved lots of chicken!) Scamp performed perfectly on the day. 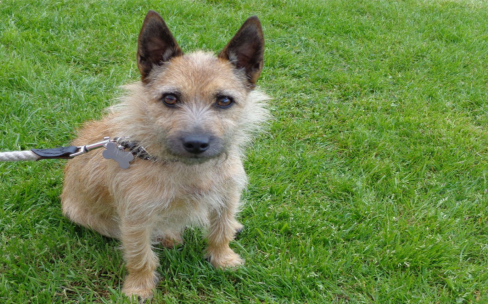 Claire arrives at Versailles, before and after.

The Star Chamber was probably the most fun set of Outlander to design and watch being built. I wanted it to have a very mystical feel to it. The construction and plaster crew topped the set with a plaster dome that they cast in pieces and attached to a metal circular grid. The dome was then pierced with hundreds of different size holes so that small shafts of light would fall upon Claire as she walked through. The walls were covered with ancient etchings of alchemy and sacred geometry. The floor was covered in ancient graphs of astronomy and in the center was an astrolabe which was an ancient instrument used to make astronomical measurements. King Louis was known to be interested in astronomy, astrology, and magic at this time. 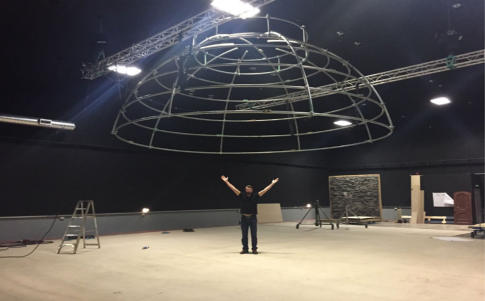 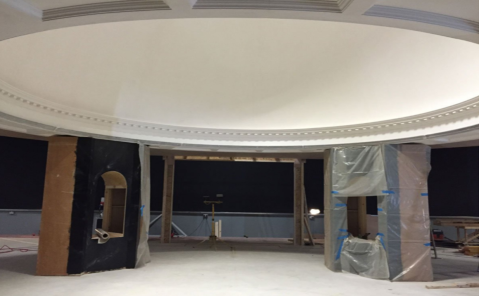 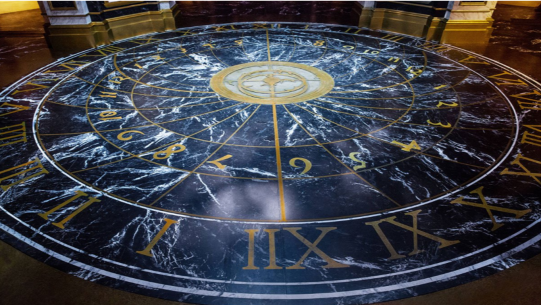 The King’s bedchamber was a reworking of the Paris apartment parlor. We had the pilasters covered with new pilasters built to match some we had seen in Versailles. We got permission from the Louvre in Paris to use images of 4 of the 24 paintings by Peter Paul Rubens that were commissioned by Marie de’ Medici. We had these printed on canvas and hung on our set walls. We also built a new fireplace to help change the look of the room. 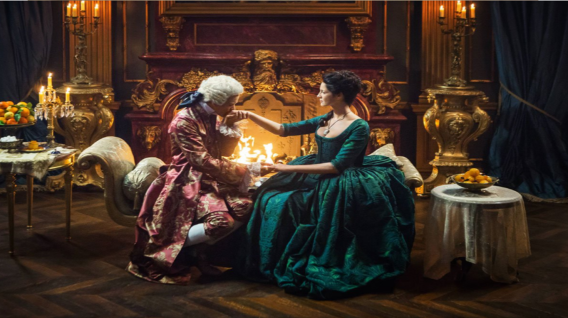