Claire and Jamie attempt to elicit support from Jamie’s grandsire, Lord Lovat; Colum MacKenzie arrives with plans of his own; Lord Lovat makes moves to advance his own interests.

A fox’s lair is nothing more than its dwelling or hideaway.

As we know, this is Epi8, which means we are over halfway through the season with Claire and Jamie returning to Scotland.

Whew! We can all breath again, but not for long.

From the preview, we already know the fox is Lord Lovat, Jamie and Jenny’s grandsire, who does nothing without a price; yet, has a history of supporting the Jacobites. So, it’s not so much what is in his dwelling as it is what he want to add to it.

The Prince is in Scotland and is forming his army. Jamie is in the thick of it all with the Prince expecting his loyalty. Murtagh is back from Portugal, and we see Jenny is being caught up on things, yet looks worried. 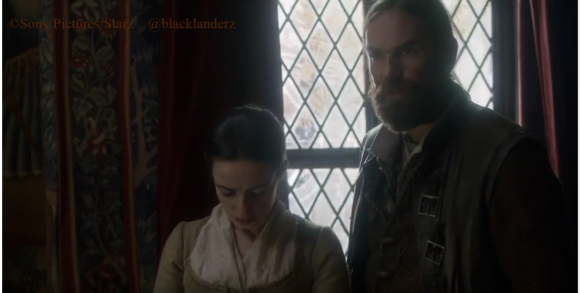 I can’t help but feel a little sorry for Jamie and Claire after what all happened in Paris. There is just no rest for the weary.

In order to build an army for the Prince, it appears there is no other alternative for Jamie, but to turn to his grandfather for help. 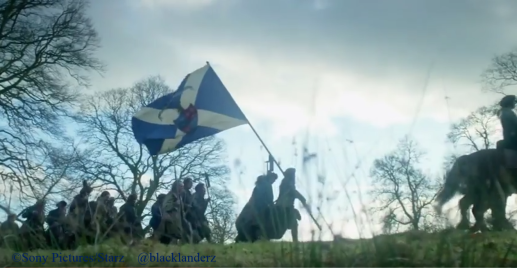 In the end of the preview, it is revealed what his grandsire wants in return for an army. . . 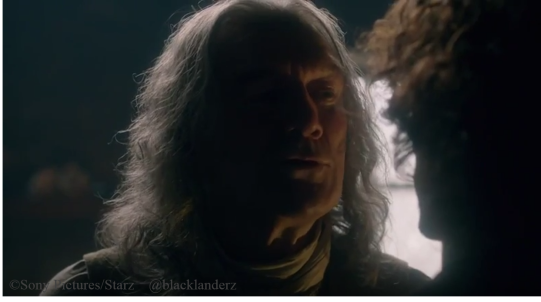 Lallybroch for your wife’s honor!

Well, Old Fox, you must not know Jamie or Claire that well.

Don’t you see how Jamie is standing toe-to-toe with you, looking dead in our eyes, and the look on his face? You don’t mess with (or threaten) either one of them, let alone their honor. So, we will see about that and what happens to you, Mr. Man!

As a side note: Did you hear the news? Starz’s announced starting in July, the premium cabler is moving all of its original scripted fare to Sundays. Starz CEO Chris Albrecht is taking a page out of his old HBO playbook.

Sundays are a prestige night and we feel our shows are definitely going to be very competitive, not just in viewership but in the attention-getting business on Sundays. So it made sense to move.

What do you think of the move?

Our Amanda-Rae has a few thoughts about it – coming in another post.

A lot has happened with Jamie and Claire in Paris; however, much has also changed in Scotland.  I can’t wait to see how the Clan, Jenny and Ian treat Jamie and Claire when they return; how Fergus blends into the extended family. They may have lost a daughter and left her in Paris, but they are returning home with a son.

I love the new key art – see heading picture. Jamie is leading the Clan (King of Men!) with Murtagh at his right, of course, and Claire at his side. Fergus must be next to Murtagh, almost to Claire’s right; his and Murtagh’s positions make sense – powerful scene and statement!  And oh yes, Dougal is there too, but he is NOT in the lead. Wonder if Claire will tell Jamie of Dougal’s offer to marry her if he hadn’t survived Wentworth.

With them back in Scotland, I also wonder if they will change the title card and take out all the scenes from France.

What are looking forward to seeing in this episode?
Hit the comments section and let us know.

Disclaimer: We hold no rights to any of the pictures. Most are from ©Sony Pictures/Starz. No copyright infringement intended.