The author is Diana Gabaldon, who is eagerly taking photographs on her mobile and gleefully saying she will be sending these to the person who does the costumes for Outlander, the TV series based on her cult sequence of novels that launched in 2014.

The suit in question is part of the National Museum of Scotland’s forthcoming exhibition about the Jacobites, a sequel to its successful Mary Queen of Scots show. Since Gabaldon’s novels, in a romance-meets-time-travel-meets-historical-fiction way, have dealt with the attempt by Charles Edward Stuart (AKA Bonnie Prince Charlie) to seize the British crown, they have invited her for a sneak preview. 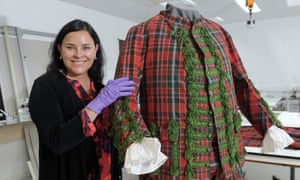