This is not just another slave story, but one of “slavery, revolution, freedom, and love” in 19th century Jamaica. ~ Vida

This three-part miniseries based on Andrea Levy’s award-winning novel about the end of slavery in Jamaica follows July (Tamara Lawrance, King Charles III), an indomitable, young slave who works on a sugarcane plantation with her detestable mistress, Caroline Mortimer (Hayley Atwell, The Avengers).

Their lives change with the arrival of the charming new overseer, Robert Goodwin (Jack Lowden, Dunkirk) who sets out to improve the plantation for both the slaves and the mistress. “A beautiful, moving, horrifying adaptation of Levy’s unsimple tale.” —The Guardian (London)

In early 1800s Jamaica, Caroline adopts the child slave July as her maid. July grows up to witness the Christmas Rebellion and the radical transformation of her world.

The Long Song follows July and Caroline’s story, and the way their lives change with the arrival of a charming new overseer, who has big plans to change the plantation — and the lives of those working there.

The handsome overseer Robert arrives, sparking a bitter rivalry between July and her mistress. Meanwhile, the field hands rebel against Robert’s work demands.

Facing labor unrest and financial ruin for the plantation, Robert’s sanity starts to unravel, with devastating effects on July. Years later, she makes a remarkable discovery.

The Long Song: A Novel by Andrea Levy 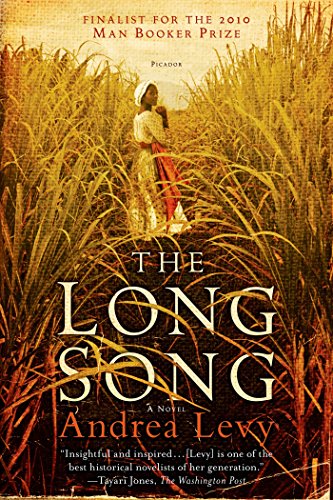 Small Island introduced Andrea Levy to America and was acclaimed as “a triumph” (San Francisco Chronicle). It won both the Orange Prize and the Whitbread Book of the Year Award, and has sold over a million copies worldwide. With The Long Song, Levy once again reinvents the historical novel.

Told in the irresistibly willful and intimate voice of Miss July, with some editorial assistance from her son, Thomas, The Long Song is at once defiant, funny, and shocking. The child of a field slave on the Amity sugar plantation, July lives with her mother until Mrs. Caroline Mortimer, a recently transplanted English widow, decides to move her into the great house and rename her “Marguerite.”

Resourceful and mischievous, July soon becomes indispensable to her mistress. Together they live through the bloody Baptist war, followed by the violent and chaotic end of slavery. Taught to read and write so that she can help her mistress run the business, July remains bound to the plantation despite her “freedom.”

It is the arrival of a young English overseer, Robert Goodwin, that will dramatically change life in the great house for both July and her mistress. Prompted and provoked by her son’s persistent questioning, July’s resilience and heartbreak are gradually revealed in this extraordinarily powerful story of slavery, revolution, freedom, and love.