The two-part report continues on the set of ‘Dragon’: The cast opens up about their characters, the showrunners explain how the new series tackles issues of race and sexual violence, and a look at the franchise’s future. Plus, the show’s new official trailer.

After HBO spent years searching to find the ideal successor series to the king of its platform, network executives picked a story that was about … what else? A struggle for succession.

On the House of the Dragon’s set at Leavesden Studios outside London, showrunners Miguel Sapochnik and Ryan Condal sit just steps below the iconic Iron Throne. Visitors to this 24,000-square-foot room tend to have the same awed reaction: It’s is such a vast ornamental space that it feels like you’re in a sacred temple, and your instinct is to drop your voice to a whisper.

Looking closer, some details have changed from the original series: The throne room’s towering pillars have become statues of foreboding Targaryen kings, dragon eggs nest in coal-fueled “incubators” and the iconic Iron Throne itself has added rows of perilous twisted swords.

Sapochnik breaks down the prequel’s story in the simplest of terms: “The main characters are two women and two men. There’s the king (Viserys), his brother (Daemon), the king’s daughter (Rhaenyra) and her best friend (Alicent). Then the best friend becomes the king’s wife and thereby the queen. That in itself is complicated — when your best friend goes and marries your dad. But from the tiniest things, it slowly evolves this gigantic battle between two sides.”

If that setup sounds more intimate than Thrones, it is. For all its action set pieces (there is a spectacular joust tourney in the pilot), one of the clearest differences between the two shows is that House of the Dragon feels like a family drama (with a dash of incest, of course).

Explains HBO and HBO Max content chief Casey Bloys: “I liked the idea of focusing on one family, and obviously the Targaryens have a lot of drama to go around. I also liked the echo of how empires can quickly fall — those are the types of conversations we are having in our own country, which I don’t think is anything I would’ve thought we’d be talking about 20 years ago.”

Although I am looking forward to whole story, one in particular I can’t wait for is . . . Lord Corlys Velaryon, aka The Sea Snake, and his crew! ~ V 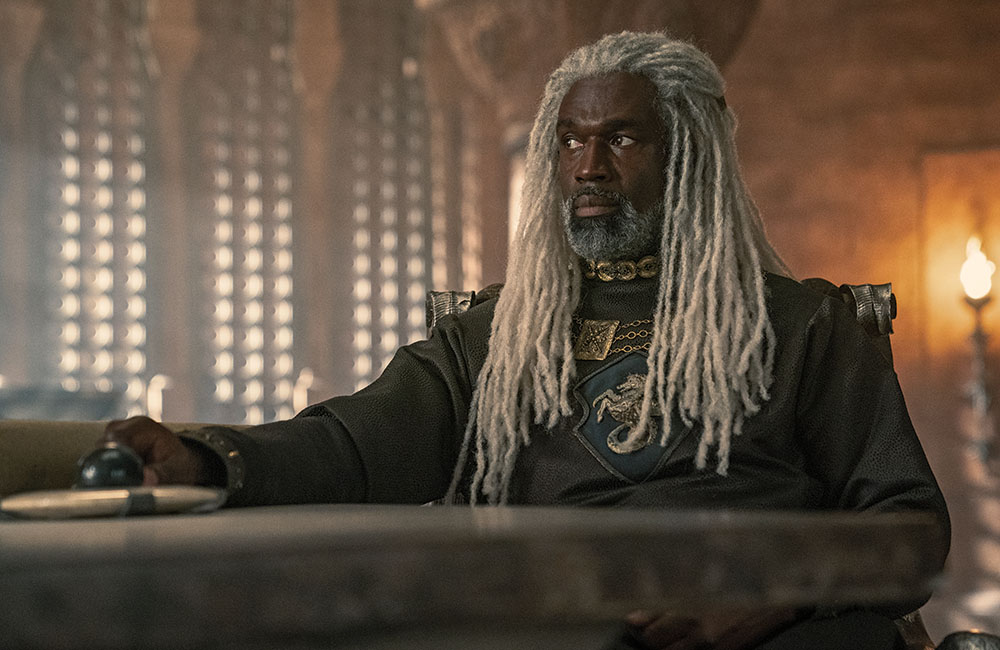 Steve Toussaint as Lord Corlys Velaryon, aka The Sea Snake, the richest man in Westeros. “He’s very much like: ‘I’m telling you the truth,’” Toussaint says. “’I don’t care if I hurt your feelings.’ On the battlefield, it’s much simpler — you’re trying to kill me, I’m trying to kill you — and I think he likes that.”

Yet Toussaint was in for an ugly shock when his casting was announced. Some fans reacted to the first Black actor being added to a lead role in a Thrones show by hurling racial abuse and epithets. It’s the latest example of a fantasy franchise’s fandom showing a toxic side when actors of color are added in major roles.

“I didn’t realize [the casting] was a big deal until I was racially abused on social media,” says Toussaint. “Yeah, that shit happened. I was just like, ‘Oh wow,’ and then I thought: ‘OK, so this means a lot to some people, but I can’t allow that to bother me.’”

Toussaint points out that while Martin’s world is a fantasy, “it still has to reflect a world.”

“I loved Game of Thrones, but my only caveat was, ‘Where’s everybody else in this world?’” he says. “Because it’s a diverse world Martin has created if you look [beyond Westeros], and I think this show comes closer to that.”

House of the Dragon | New Trailer ~ Video via HBO Max

All the dragons roar as one.

House of the Dragon premieres August 21 on HBO Max.

HOUSE OF THE DRAGON Trailer (2022) Extended ~ Video via MovieGasm.com

House Of The Dragon | Official Teaser ~ Video via HBO Max

200 Years before the fall of the throne. A dynasty reigned.

Disclaimer: We hold no rights to any of the ictures. No copyright infringement intended.