Amanda and I worked to get Blacklanderz members VIP tickets to the panel. I sent an email request a little over a month ago. They responded and indicated they would be in touch. Mind you, I had not made any arrangements to attend this year. None, zero, zilch!

The Outlander Panel was on October 5th and I received a response from STARZ PR on October 1st. I was in a meeting that was about to start. When I reached for my phone to silence it, I saw I had a new email message. When I read the first line, I wanted to start screaming . . . O – M – G, GTFOOH!! I read it again, just to make sure I was not seeing things – see below.

This letter is to confirm your seat in the VIP section of the OUTLANDER panel at New York Comic Con on Saturday, October 5th. The panel will be from 5:30pm-6:30pm at The Hulu Theater at Madison Square Garden. All attendees must use the 4 Penn West Entrance (different from last year!) which is located on 31st Street between 7th Ave and 8th Ave. This entrance is closer to 8th Ave and has a blue awning that has 4 Penn West displayed on it. Attendees will check-in between 4:45pm-5:15pm at a table with MSG staff and receive their wristband. You will then proceed in to the theater to the reserved seat section (Section 202).

I immediately forwarded the email to the members who were going. Then, I thought I might need to send them the names, which I did. Needless to say, I have no idea what was going on in that meeting. For two and a half hours, I contemplated going, even though it was the last damn minute.

When I got home, I talked to my sister and told her what was going on in my mind. How could I possibly miss this!! Hell, I couldn’t even sleep and woke up at 3 a.m. The next day, I decided to see if I could get a Comic Con badge. If I couldn’t, that would be the answer. Then, I remembered the VIP tickets. I emailed and asked if I was able to get a Comic Con badge, would they have another ticket for me. And, they said they would. (Just ‘luvbs me some Starz PR) So, I went to the NYCC site and all I a saw were red, bold letters . . . SOLD OUT! My heart sank. Yes, I know I was last minute, but I thought there would be something out there.

But I kept reading and saw that they worked with a third-party vendor (LYTE), who buys people’s badges that for whatever reason cannot attend. So, I selected a 4-day badge, put in my information and waited to see where I landed on the waiting list. Keep in mind, I wasn’t even going to get there until Saturday, if all went well. Why? Because I had ANOTHER meeting scheduled for Friday that I could not cancel. The first email came that said they received my request and I was 1st on the Waiting List. Then, immediately afterwards, a second email came that said . . . You’ve got tickets!  I immediately emailed Starz PR back and reserved a VIP ticket for myself. Okay, now I was getting somewhere. This was Wednesday.

The only thing holding me up now was . . . a plane ticket and hotel reservations. Since I was going to be on a tight schedule, I spoke with my God-sister, who lives in NY, to make sure I had my logistics correct. After a two days, I had everything booked! This was Thursday. Friday came and went.

Now, it was Saturday and I won’t go into the ordeal of getting to the airport, through security and to my gate. But, I got there in time to sit and catch my breath! Then, they announced the plane that was coming in was running lat. It was as if something was trying to prevent me from going. 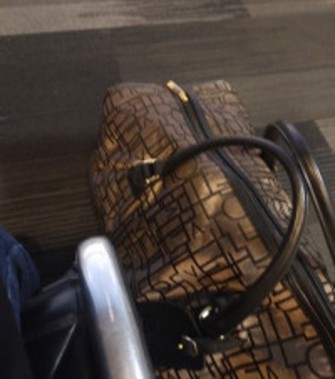 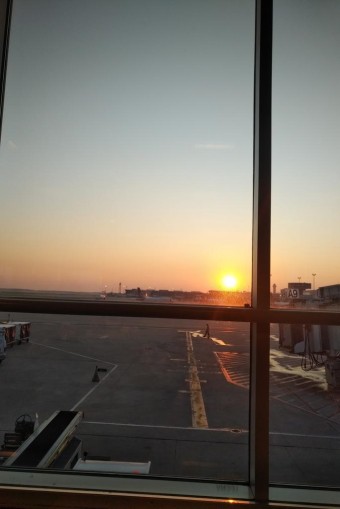 and all I could think of was Claire in S2 finale. She had to ‘go back’ and I had to ‘get there’. 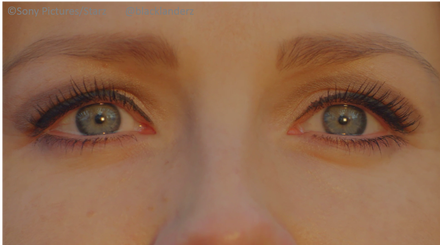 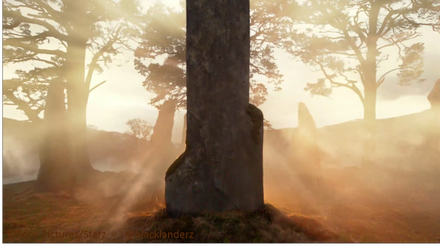 When I arrived in NY, no one told me that La Guardia was under construction and I had to board a shuttle, just to get to where the cabs were. Once in the cab and close to Javits Center, the streets were blocked. I had to jump out the cab and walk the rest of the way. Then it hit me. I knew the site was legit; but, for some reason, I panicked that they might not have my badge. I get there and see all these damn people e-v-e-r-y-w-h-e-r-e. By now, it is close to 2 p.m. I got to Will Call, no one was in line – thank God, picked up my badge and was off to catch another cab to the hotel. I only get a few blocks and the traffic was maddening. Once again, I jump out the cab and walk the rest of the way to the hotel only to find the check in line was snaked around and around and around. I did not get to my room until close to 3:30 – just enough time to change and head to Madison Square Gardens, Hulu Theater, for the panel.

As I am nearing the location, I see Amanda in her blue cosplay costume and hoodie jacket. I walked up behind her and tap her on the shoulder. She turned around and said, “OMG, you ARE a real person.” We embraced and I was finally, finally able to exhale. From the time I left home that morning, it had literally taken me 10 hours just to get to the spot! 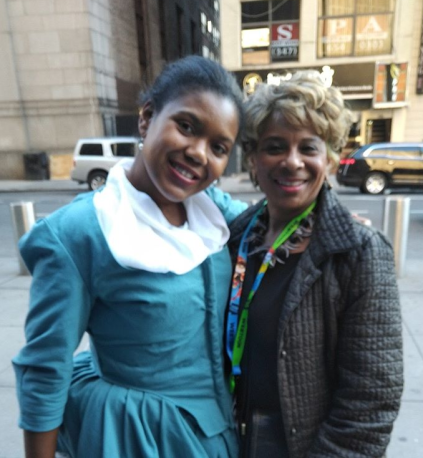 While waiting to get in, I turn around and another Blacklanderz member, Cathy, was at the table trying to sign-in. I tapped her on the shoulder and we also embraced. I met other Outlander fans/bloggers that I met online (Antoinette, Karmen and Courtney from #OutlanderBehindtheScene, Outlander Brazil, Outlander Homepage and a lot of other people). Though we had never met in person, it was if we already knew each other.

Once inside, I really thought I was going to see people scrambling around to get a seat, but none of that happened. Well, we did jump over a few chairs (ahem . . . Amanda) to get a better spot. 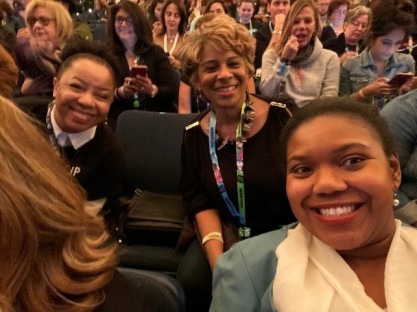 Then the panel started with the Karaoke-type game we mentioned in our Convo. It was so surreal being in there and I was loving every minute of it! We sang along with the songs and were having a blast. Then the panelist came out. Again, I could not believe I was sitting there, with other Blacklanderz members, seeing all the actors, the producers and the author of the book that brought us all together in person and not at home watching on the computer. It was a great panel.

After the panel, some of us met up at The Algonquin Hotel Times Square, thanks to Courtney! We also met Sera-Lys McArthur (Johiehon), who is one of the sweetest people I have met. She hung out with us the whole night. 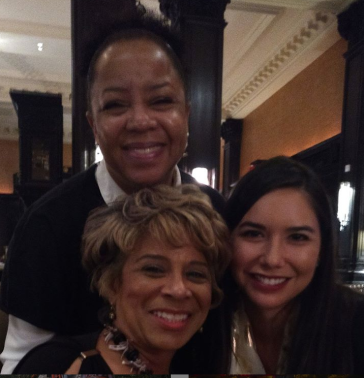 Unfortunately, some of our members met up on Friday night and had other plans on Saturday (hate that I missed that!), but I was so grateful that Michelle met up with us. 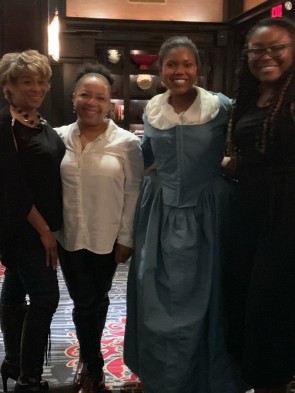 As the night wound down, and as you can see in the picture above, I was fading. By the time I got back to my hotel and got in the bed, it was after midnight and I had to fly out the next day. My flight left NY on Sunday at the exact same time that I had arrived Saturday, the day before – literally a 24-hour trip.

But, I will tell you one thing . . . I refused to let anything stand in the way this time and I would not have missed it or seeing Blacklanderz members for the world!