On May 23, 2021, Humanities Texas and Foodways Texas hosted a conversation with award-winning food and nutrition journalist Toni Tipton-Martin and Chris Williams, chef and owner of the Houston restaurant Lucille’s. They discuss the remarkable life and legacy of Lucille B. Smith, Williams’s great-grandmother, who inspired his restaurant and is highlighted in Tipton-Martin’s The Jemima Code, a history of African American cookbooks.

Lucille Bishop Smith was a chef and entrepreneur, known as the first African American businesswoman in Texas. Her first cookbook, Lucille’s Treasure Chest of Fine Foods, published in 1941, comprises over two hundred recipe cards contained in a cardboard box. She ran a successful catering business in Fort Worth and began selling “Lucille’s All Purpose Hot Roll Mix,” the first packaged hot roll mix on the market. Her enterprising spirit and resolve continue to inspire many today.

The following conversation has been excerpted for length and lightly edited for clarity.

Toni Tipton-Martin: I was a traditional journalist in my previous life. I came home to raise my family but never wanted to give up that identity [of being a journalist]. I was using cookbooks as a mechanism for understanding my own family history and for talking to my kids about their cultural history. Of course, a lot of that conversation involved food. I was having these conversations with my kids and looking for evidence of what I knew in my heart and spirit—that African American women had made significant contributions to American cooking, but we were generally left out of the conversation.

I knew in my heart and spirit that these women existed, but they were invisible [in the history books].  As a journalist, I began looking for them in the pages of Southern food history, and, no matter where I looked, I could not find them. Cookbooks became a curiosity for me. I thought maybe there were Black cookbooks, and, to my great surprise, there were lots and lots of them. One that turned up on a bibliography that I started to research based at the University of Alabama was by a woman named Lucille Bishop Smith. What intrigued me about [her cookbook] was the fact that it was called A Treasure Chest. I was hot to have that. “What could that possibly be?” There were never any photographs of it. Nobody had any copies of it. I didn’t know what it was going to be.

When I did finally get my hands on it, I discovered this amazing collection of diverse recipes. They were not limited to the soul food canon—no disparagement to the idea of soul food cooking—but what Lucille did for me, along with several other early cookbooks that I was able to unearth, was reveal that there was a competency and a broader culinary experience for African Americans than had ever been recorded. They were preparing the kinds of luxurious foods that we learn about in the mainstream, largely because they were either caterers or culinary teachers. But Lucille had an entirely different story in the fact that she was an entrepreneur.

Many of the early women, of course, were entrepreneurs and provided an opportunity for themselves to create wealth, to transfer wealth generationally. Some purchased their freedom. But she had one of the largest biographies I had ever encountered. She had so many of the variables that I encountered in individual women [while researching]. I might find a caterer, I might find a cooking teacher, I might find a manufacturer, I might find somebody that had achieved a certain level of affluence in the food world, but no one that had all those characteristics entangled, wrapped in one.

I conceived of this idea of telling [these women’s] story, but no publishers were interested in hearing that story. It was a counternarrative to what we think about in the food world. I’m aware that it also caused some people to question their history, what we had been taught. This was a completely different narrative, this idea that African American women had used food as a mechanism to create their own wealth and independence. I had a lot of trouble [finding a publisher], even though I had a big identity and reputation in the food world. Even I could not sell a book with this content.

So, like my ancestors, I decided to self-publish and took this material to the internet. I created a blog, even though, as a journalist, the idea of blogging and writing in the first person was completely foreign to me. I actually went kicking and screaming to that medium. I didn’t feel that I had a choice, and that was another common denominator for these women, my ancestors: they were self-made. They had to find a workaround within a system that did not embrace them. It used them, it took advantage of them, it benefited from their creations. But it did not attribute any of the value to those women.

Lucille was one of my first stories for all the reasons I’ve defined, but there was one other important point that I discovered. I hadn’t fully made the connection between her and a major product in American shelves: the hot roll mix. I had seen that box in my mother’s kitchen. It was produced by Pillsbury at about the same time that Lucille was selling hot roll mix in her community. As a reporter, of course my interest was piqued. I did not have time to verify whether Pillsbury was inspired by her, but subsequently other writers have done that work and have made a better connection to her.

The reality is that African American women like Lucille were creating products like the hot roll mix, and those recipes disappeared. Those food products disappeared into the larger American food canon, and those women were lost. So, I created my own nonprofit [the SANDE Youth Project] and used those women as inspiration. I became friends with Chris Williams and his family because I felt a sort of kinship to Lucille. I felt like—this is kind of weird to say—but I felt like she belonged to me like an aunt or a grandmother just as much as she did to them because I gave her back life. It formed a relationship between Chris and me. I’ve enjoyed watching him be inspired by her as well. 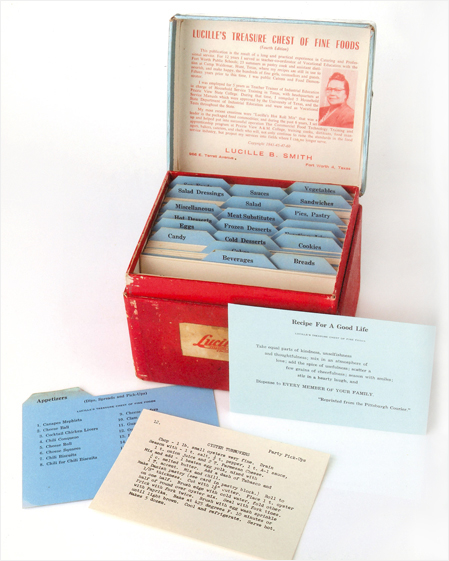 Lucille’s Treasure Chest of Fine Foods, fourth edition. Fort Worth, Texas, 1941. From The Jemima Code: Two Centuries of African American Cookbooks by Toni Tipton-Martin, © 2015. With permission of The University of Texas Press. 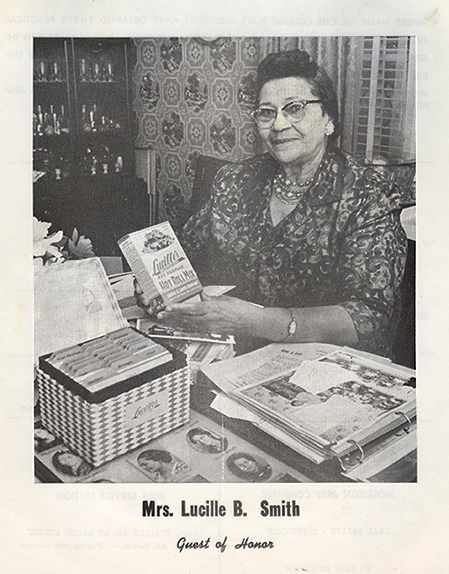 Lucille B. Smith with her hot roll mix and cookbook. Courtesy Chris Williams.